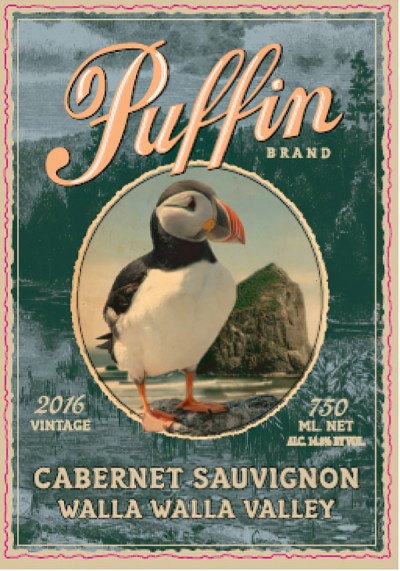 Puffin Cabernet Sauvignon delivers enticing aromas of cherry, black currant and herbs.  On the palate, the dark fruit flavors of combine with notes of black licorice, coffee, sage and cedar.

A beautiful, deep garnet color, this Cabernet has firm tannins and a strong acid structure that indicates this wine is going to age nicely during the next 10 years as the acid, tannins and fruit integrate.

Made from 100% Cabernet Sauvignon, all of the fruit for this delicious wine is from the Spofford Station vineyard in Walla Walla, WA.  The relatively flat vineyard has a slightly southwest aspect, uses drip irrigation and VSP (vertical shoot positioning) trellising.  This vineyard is well known and well respected for its Cabernet Sauvignon.

In the cellar, this Cabernet Sauvignon was aged for 15 months in oak barrels.  Approximately 67% of the oak barrels were French and 33% of the oak was American.